When I was researching information for my Kentia Palm book called "Seed to Elegance" I was fascinated by how much the English Royalty in Victorian times loved Kentia Palms in their residences, and as the featured decorative plant in any family portraits or at historical coronations.
George Plumptre wrote a great article that was featured in an edition of Architectural Digest in the late 1990's. The article was titled "Strange Tale of the Kentia Palm". George kindly allowed me to use extracts from the article in my book, and two of my favorites were associated with Queen Alexandra.
In the late -19th-century England, Kentia Palms became the horticultural rage, with the trees sought after by gardening enthusiasts, including the royal family. The slender, plumelike leaves of the Kentia Palm infused the stately drawing room at Sandringham, King Edward V11 and Queen Alexandra's country residence - with color. A Kentia Palm was a prominent design element in Queen Alexandra's drawing room at Windsor Castle. At Queen Alexandra's coronation in August 1902 there were magnificent Kentia Palms displayed in the background. 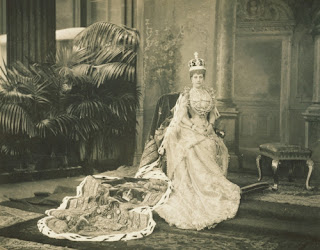 It is amazing that this majestic palm has held a special position among plants for well over a century, and is still one of the best plants in the interior world for its elegant appearance and unfailing ability to grow indoors.